Appalling living conditions, corruption and anti-Semitism were daily realities for the men interned in the camp. Hear the internees' experiences in their own words.

Such was the fear of espionage, and a ‘fifth column’ supporting the Nazi war effort, Bury Times was obliged to refer only to a ‘once large cotton mill’ when it described the situation at Warth Mills on 15 June 1940. ‘Up to two thousand aliens can be accommodated in the three storeys,’ it announced. That capacity would soon be exceeded with already hazardous conditions deteriorating rapidly.

“It was like something out of Dickens, broken glass, dust in the air from the old mills that had been there and broken machinery.” Joe Pieri

Warth Mills had laid unused for a number of years, and broken machinery, oil and glass covered the floors. Although it was Summer and the weather was good, the building was cold at night and rain came in through the smashed roof lights.

The sanitary arrangements were inadequate to cope with the vast numbers of men interned at the mill. There were around a dozen taps, making it impossible for them to maintain a basic level of hygiene while the lavatories were hastily dug latrines. While the Geneva Convention ensured prisoners of war received decent meals, internees didn’t have the same protection. Food was sparse with no proper rationing system to ensure every man got his fair share.

Listen to German Jewish internee Francis Ludwig-Carsten describe what conditions at Warth Mills were like. © IWM, no. 4483

Listen to Italian internee Luigi Beschizza describe how internees struggled with the surroundings. © IWM, no. 13149

In July 1940, the International Committee of the Red Cross sent a delegate to report on conditions in expectation of Warth Mills changing to a prisoner of war camp. He wrote that it was substandard because of ‘its dilapidated condition, lack of hygiene, absence of hot water, and the fact that there were beds for only 30 sick people at a time whereas 250 needed treatment’.

Quakers’ relief worker William Ravenscroft Hughes filed a report the same month. He had been to camps in Germany and Britain. He states that, at this point in the war, Warth Mills is ‘certainly worse than any I have seen’. He goes on:

‘An interesting incident occurred when a man stopped me and said, ‘I saw you at Sachsenburg Camp’. This was true […] Many of these interned men have been in German camps. Several had said to me that the physical conditions in Dachau were better than in Bury. Having seen both, I agreed, but we also agreed, ‘Die Leute sind ganz anders, Gott sei dank!’ (‘The people are wholly different, thank God!’).’

Perhaps the most shocking report into conditions at Warth Mills was completed by Sir Walter Monckton from the Ministry of Information. He writes of two deaths in the camp. “The two men who succeeded in committing suicide had already been in Hitler’s concentration camps. Against this they held out, but this camp has broken their spirit.”

The situation for Jewish men, women and children in Nazi concentration camps would, of course, become unspeakably worse. It’s nonetheless interesting to note that, in mid-1940, conditions at Warth were bad enough to justify unfavourable comparison in official reports.

The Case Against Major Braybrook

Major Alfred James Braybrook was commandant of Warth Mills Internment Camp from 5 June 1940, having previously worked at a camp at Kempton Racecourse. An officer in the military police, Braybrook was adept at confiscating items of value and never restoring them into the possession of their original owners.

Every internee who arrived at Warth Mills had possessions taken from them – books, razors, typewriters, rugs. In return, they were given a blanket, some hey and invited to find the least filthy corner of the mill in which to live.

Artist Hellmuth Weissenborn, whose print of the camp had upset Major Braybrook, later talked about the thefts.

Listen to Hellmuth Weissenborn describe what was taken from him. © IWM, no. 3771

Listen to Gaetano Rossi describe how his prayer book was taken from him and his ‘dressing down’ by Braybrook. © IWM, no. 12911

Major Braybrook appeared on remand at Bromley in Kent on 17 April 1941. He was charged with stealing 100 sovereigns, two typewriters, jewellery and 1040 razor blades. Among those who provided evidence was Ernst Schwitters, son of Kurt, who claimed his typewriter had been stolen from him. Braybrook was sentenced to 18 months imprisonment.

But perhaps Major Braybrook’s worst crime was not the embezzlement of internees – rather his inability to distinguish between anti-Nazis and the captured Germans and pro-Nazi aliens.

Listen to Austrian internee Stephen Hearst talk about what it was like at Warth Mills and Major Braybrook’s struggle to tell the Nazis from the Jewish refugees. © IWM, no. 26500

It was this failure that led some Jewish internees to feel enormously vulnerable. In the absence of adequate protection on the part of the camp’s commandment, they were forced to devise their own strategies for protecting themselves should the worst happen.

Listen to German internee Ludwig Spiro describe how internees were stripped of their belongings and Jewish men like himself were exposed to anti-Semitism. © IWM, no. 4343

In response to both the inadequate conditions at Warth Mills and the various failings of Major Braybrook, certain internees staged their own protests. Most notable of these was a hunger strike organised by German artist Hermann Fechenbach. 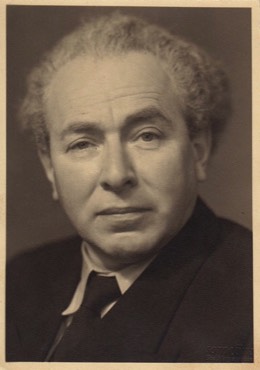 Hermann was a distinguished German Jewish artist and printmaker who had arrived in England with his wife, Greta, in May 1939. Aghast at the conditions at Warth Mills, he incited internees to join him in a strike. He was arrested for his actions and taken to cells in Liverpool before joining other internees from Bury on the Isle of Man. It was here that he completed three linocuts reflecting his time at Warth Mills and the hunger strike that got him out.

The Tragedy of the Arandora Star

Many of Warth Mills' Italian internees were bound for Canada on the SS Arandora Star, when it was hit by a torpedo on the morning of 2 July 1940, killing many of those on board. Read and hear some of their stories.